(We understand in the end that natural species are chosen (for totemic association) not because they're "good to eat" but because they are good to think with, good to ponder on).

ABSTRACT
In the Mutuaga corpus of master carvings, discovered to date, there are some 25 lime spatulas and four staff finials identified as having handles decorated with a pig figure. Few of these zoomorphic figures appear to display critical specific features associated with pig anatomy nor any general overall resemblance to pigs. This review proposes a revision of both the current generic pig design classification and the Mutuaga naturalism style intent. A number of local Massim fauna are closely matched to features in the Mutuaga carvings to identify those native animals more likely represented in these carvings. For a detailed analysis of the congenital deformities present in Mutuaga human figure corpus see previous Ethno Essay No.14. Full biography of Mutuaga the 19th. Century Massim Master Carver see Beran 1996. Mutuaga was active as a carver from the late 1870s to approximately 1920, with a known corpus of some 130 + works, although the actual number may be many times greater. Sir Cecil Able states in his introduction to Beran that Mutuaga must have sold a great many carvings to visitors passing through the Suau passage. His carving style became increasingly naturalistic over this period. All photos of Mutuaga pieces used in this essay courtesy of Harry Beran.

A PROPER PIG
If we are accepting of Beran’s self evident classification of Mutuaga’s formal style of carving (sculpture) as naturalism (Realist) then fig. 1.96 Plate 130 below is readily interpreted as a pig.
The carving looks like a pig and has a number of pig anatomical features i.e. cloven hooves, pig snout, oval piggy eyes (not round nocturnal marsupial eyes), thick pig body conformation with minimal neck head link and a pig’s tail.
If it is possible to identify a Mutuaga naturalistic carving as a specific animal, in this case a pig, and also recognise the highly stylised ubiquitous Massim (frigate?) bird motif when added as a decorative component to these spatula handles, then ipso facto, the other carved fauna which do not possess pig like features must be other species specific portrayals of native mammals or purely imaginary freaks.
If there is a rule anywhere then the rule is everywhere .CLS. 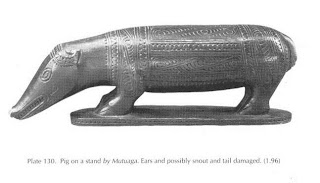 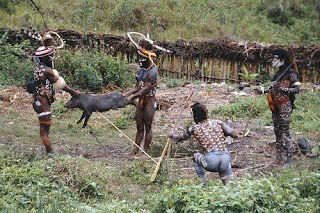 As in the Mutuaga pig sculpture (Plate 103) PNG Village pigs overtly display those physical traits which are faithfully and realistically portrayed in the carvings. Body shape bulk and conformation, legs, hooves, tail straight or kinked, eye and ear position all accord. Long tapering muzzle behind the snout 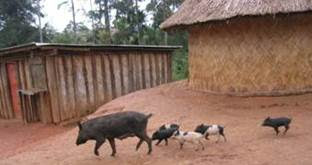 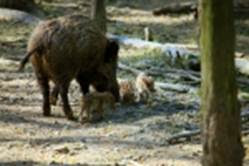 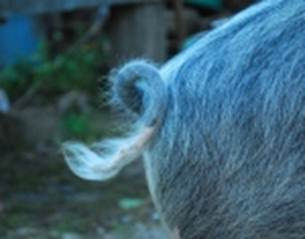 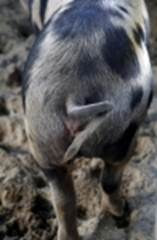 Pigs were first domesticated in Papua New Guinea some 10,000 BP., several thousand years before Europe or elsewhere in the World. Pigs play a significant role in Papuan village daily life, economy, social, ceremonial & ritual. (See References for full link to PNG Pig prehistory paper - domestication in Papua & spread to rest of World).
However the pig motif is not well represented in Melanesian art forms with the exception of pig tusks as both body adornment & nose pieces in Sepik masks. Pig-snouted pottery on the Sepik and Iatmul over modelled pigs’ heads. Basketry masks from the Maprik , Malagan mask from New Ireland are infrequently in pig head form. Also large full pig body basketry works are made in the Sepik. Pig tusk symbols appear in Asmat art. Pig motifs are generally unusual in New Guinea decoration for drums, masks, shields, canoe splashboards , flute-stoppers, bag hooks etc. Birds, fish, crocodiles, snakes - yes and often. Pigs hardly ever. It is possible that because the pig is a significant capital item, which plays a vital ceremonial and economic role in serious matters such as dispute settlement and marriage arrangements, the avoidance of realistic images is deliberate. This prohibition would avoid any possible supernatural sanctions and the pay back repercussions for the carvers’ clan should the village pig population suffer future loss or pestilence. It is unknown if pigs are totemic on the same level of relationship as local native fauna. If not this may be a further reinforcement of the capital trade economic status of Papuan domestic village pigs which would effectively prohibit such totemic monopolisation.

FINDING THE GAMMON PIG & OTHER MAMMALS

And whether pigs have wings. Lewis Carroll
Following plates & titles are from Beran 1996.
In Beran (113) it is noted that other writers on this subject have identified the animals carved on these lime spatula handles as Cuscus (possum) in Haddon 1894,p.210, & Douglas Newton 1975, 111. 15.
Crocodile by Chauvet 1930, Dog by Frith in 1936 & Bandicoot by Sir Cecil Ables to Beran in 1988. Only Black catalogued pig for an unknown reason. Ables identified Bandicoot for the obvious reason that the animal looked more like a bandicoot than any other. He later changed this interpretation, not on a revised taxonomy but on the basis that on reflection he considered the pig to be more important for Suau culture. So for 90 years Sir Cecil thought of these carvings as representing a bandicoot. There appears to be no record of Mutuaga identifying the animals he was carving in the new realist style – perhaps he considered, that naturalism as an art form dictates that the object was meant to look like the subject, it required no great explanation? What you see is what you get. 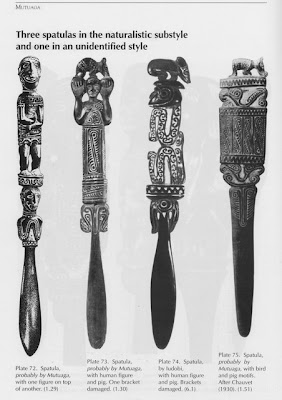 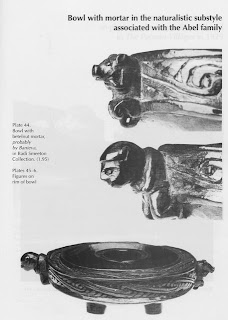 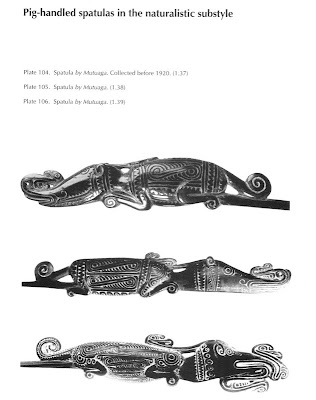 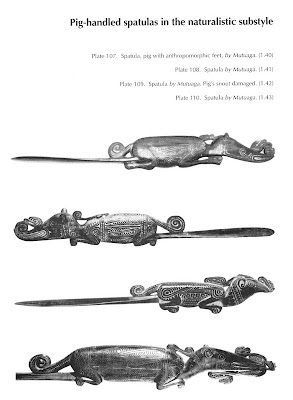 Plate 104-110. All of the above (carved mammals appear to display zero pig like features. These creatures possess a distinct neck ( pigs have thick neck) (the architectural decoration bridging the shoulder to back of head is discussed later),cuscus/quoll type ears, long thin bandicoot type nose & limbs, clawed /rolled paws not cloven hooves, a long prehensile tail roll as opposed to a pig kink or straight tail. Round nocturnal marsupial eyes. 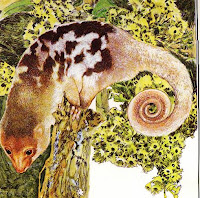 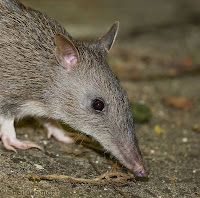 Most notable is that pigs do not lie or crouch in this position with feet/legs tucked up. Pigs normally stretch out on their side either in a wallow depression or on flat ground. The crouch as portrayed in these carvings is more typical of a quoll, bandicoot or dog crouch. Kim Akerman notes that Pigs on Japanese netsuke often shown sleeping with legs tucked beneath them. 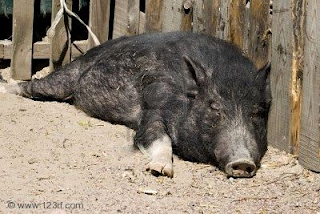 The snout/nose decoration of a frigate bird (or pigeon, osprey – Beran p 118)(plate 104, 105, 106, 109 & 110.) is a possible indication that the main animal portrayed is a carnivore or scavenger (eg quoll). Possums also make a bird like tree nest so this may be representative of a traditional Massim taxonomical similarity between bird & mammal not existent in European science or cognition. From a design perspective this decorative feature appears to directly extend from the upper lip or tongue & in two cases (106, 110) from the lower lip as a double motif. All have a decorative design element which appears as a laid back crest which bridges from the back of the head to the shoulder top. This may be a structural element to strengthen the architecture of the thin neck or may have Massim local cultural significance. As a form following function dictate none of these decorative elements particularly lend themselves to a smooth comfortable ergo dynamic easily manipulated spatula handle form. This alone is indicative of a cultural imperative for this decoration rather than a functional dictate perhaps. It has been suggested that the more decorative exaggerated rolling scroll frieze on the snout top and bottom of some examples may represent the large prominent whiskers of nocturnal quoll and bandicoot species. (See examples 31, 43.) 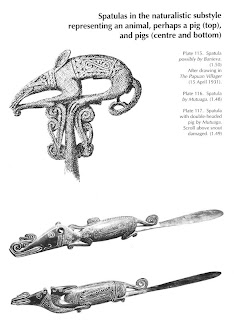 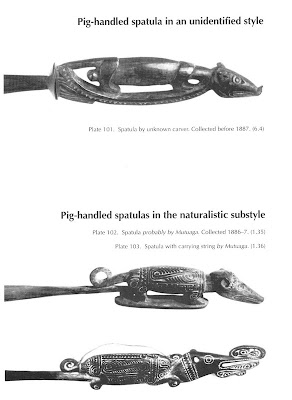 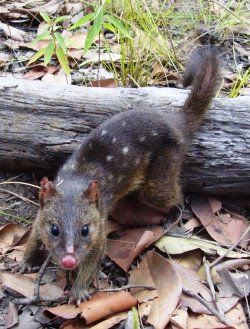 Quolls feed on a large range of prey including birds, rats and other marsupials, small reptiles and insects. They are reported to feed on prey larger than themselves. They are good climbers but also spend time on the forest floor. Although nocturnal, they spend the daylight hours basking in the sun. They nest in rocky banks, hollow logs or small caves. Because they are known to scavenge, persecution by humans may be putting pressure on the population. They also face predation and competition from introduced species such as dogs, cats and foxes. 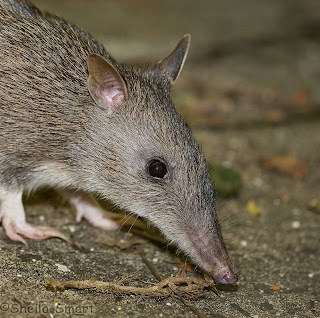 The New Guinean long-nosed bandicoots (genus Peroryctes) are members of the Peramelemorphia order. They are small to medium sized marsupial omnivores native to New Guinea. 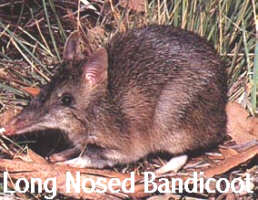 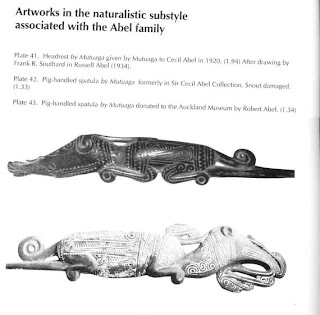 Ccuscus genus Phalanger , centred in New Guinea and extending south to the rainforest of Cape York, east to the Solomon Islands and west to Sulawesi (Celebes). It has a flat face, short ears and dense woolly fur on the body and limbs; its long prehensile tail is naked and scaly for most of its length. Most

cuscuses are large animals, about 60 cm (24 in) long, not counting the tail. They nest in hollow trees. The best known cuscus is P. maculatus , the spotted cuscus, which is chiefly creamy white in colour, with spots of chestnut and black on the back and with grey or reddish legs. 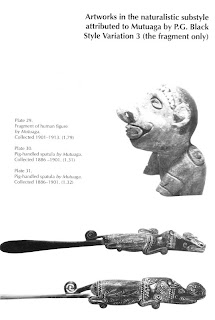 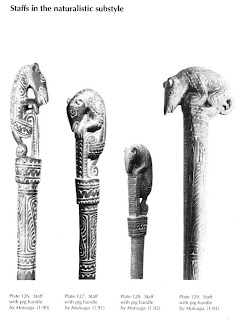 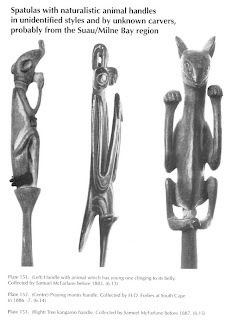 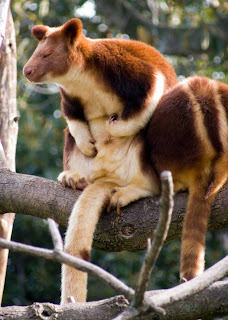 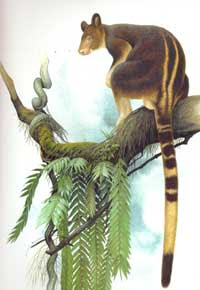 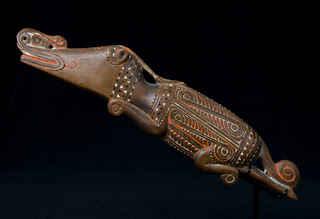 CONCLUSION
Mutuaga carved one perfect pig, however to extend this pig clade to any of the other known Mutuaga mammal carvings of his Realist corpus requires an unsafe leap of faith and misplaced imagination which cannot be justified . On the physical evidence ohttp://www.blogger.com/img/blank.giff the carved animal figures anatomical features the irresistible conclusion is that all display many of those key elements which naturalistic sculpture of local native mammals would portray. Equally clear is that the decorative elements are not full explained and that we are yet to know the whole story and traditional meaning of Mutuaga’s intent. Totemic association of the traditional carvers to local native fauna, particularly mammals, is a possible explanation for the subject animals represented in the realistic sculpture from the Suau region during Mutuaga’s time. 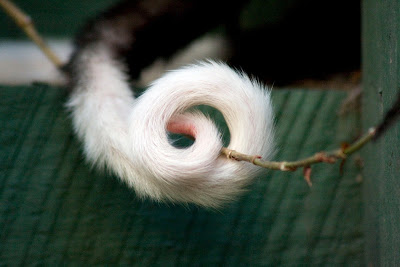 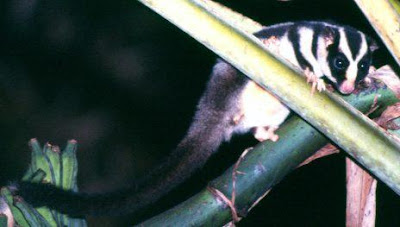 Thank you for your patronage.  Trust you enjoyed your visit.  All the best Arthur